You are here:
Enter Now!

Maidstone Harriers was recently approached by a friend, asking for some help with ideas on what we can do to raise money to support #TeamSeth, and as a competitive club we naturally turned our thoughts towards a race! And so the Maidstone Harriers Charity 10k was born, and because of lockdown, we are doing it as a virtual run. Just get out and run/walk 10k in a single go within the first two weeks of March and get your Pirate Medal!

Now, this might get you asking a couple of questions, namely, what is #TeamSeth all about, and why is it Pirate themed?

Well, Seth is a young boy who loves all things pirate, and he is the inspiration for this event. 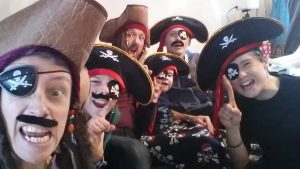 At the Harriers, we are a family, and when one of our family is hurt, we all feel pain and we try to help as much as we can. Sam Dickenson was a Harrier when, in 2017, her 4-year-old son Seth was diagnosed with an aggressive cancerous brain tumour, and here is his story in Sams words:

Seth was diagnosed with a medulloblastoma brain tumour a couple of weeks after his 4th birthday, right before Christmas 2017. Following a blue light dash to King’s College Hospital, he underwent a long operation which was completely successful in removing the whole tumour. Unfortunately, MRI scans showed signs of early metastasis to his spine which resulted in referral to the Royal Marsden hospital.

There, Seth underwent daily radiotherapy to his brain and spine for 6 weeks, alongside chemotherapy. Another 6 months worth of chemotherapy followed this as well as another trip to King’s for surgery for hydrocephalus, a build up of fluid on the brain.

Happily, in October 2018, end of treatment scans showed Seth now had no evidence of disease and he got to ring the end of treatment bell at the Royal Marsden surrounded by his friends and family.

Seth continued to be classed as a high risk patient and has been undergoing regular scans every 3 months since then. Despite being physically really fit and well, unhappily recent scans have shown a new area of disease in his brain. Having been in talks with our oncologists and neurosurgeon, the way forward appears to be for Seth to undergo another operation to endoscopically try to remove as much of the tumour as possible. This will then be followed up by more chemotherapy.

Although we have a positive plan in place to try and fight the tumour, we’ve been told that realistically we now stand only a very small chance of a complete cure and that the best we can hope for is to give Seth a good quality of life and time to make memories with us, his parents, and his 3 older brothers.

To say this was not the news we wanted is an understatement. Whilst we know that the odds are highly stacked against us, we are determined to fight this with everything we’ve got and to make the most of every minute we get together as a family.

At Harriers, we all remember how devastating it was for the Dickensons to learn this awful news, and we’ve supported them for the last couple of years as they’ve travelled along the brain cancer journey that they didn’t want to be on. We’ve been inspired by their courage and we’ve cried for their despair.

Now, as we learnt that treatment is no longer working and little Seth has little time left, we’ve decided to do what we can to support the family’s chosen charity, Brainstrust, the brain cancer people.

So join us, as a show of solidarity with a well known and loved family, by participating in our race, with the entire profits going to Brainstrust.

And if you are so inclined, we’d love it if you would dress up and do your run all pirate themed! There is no pressure for this of course, but if you do we’d love to see your pictures and share them with Seth!