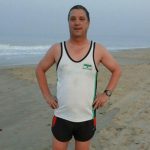 I started running way back in the 1970’s due to my sister and Dad wanting to run the London Marathon. I thought this was a good idea. My first run was around the block of around half a mile – I was dead. In those days there was very little in the way coaching and training. I joined the Maidstone Harriers as they were just establishing themselves.

My first official race was the Tonbridge 10 Mile. I ran with my mum who also started to run. It took around 2 hours 15 minutes. From there I progressed to half marathons, then eventually competing in the London Marathon in 1986 with Christa, Mum, Dad, and brother Philip. I have since run the London Marathon two more times. I continued to regularly run and raced at many distances and venues around Kent. I ventured up North and ran the Great North run. My first overseas race was the Jersey Half Marathon to which Maidstone Harriers organised a group trip. Since then I have raced in Malta and Cyprus. I ventured into Cross country and ran in the Kent fitness league.

In 1994 I stopped running due to work commitments. In 2004 I changed jobs and found a group of work colleagues who ran a monthly handicap. 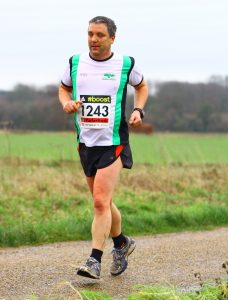 This prompted me to start running again and the following year I won the handicap trophy.

In 2005 i rejoined Maidstone Harriers who were by now at their new home only 1.4 miles away.

Since then I have ventured into cycling and in 2017 competed in my first duathlon. Being unable to swim I have not tried any triathlons. Last couple of years due to health issues my running has been very limited. However now I am in good health and back training.