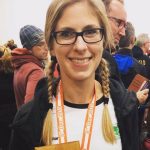 I always wanted to join a running club, and in late 2017 I took the leap and joined the Harriers. Let’s just say that my running experience has been ‘undulating’ since that point. I started to improve, and then was out again by about February 2018 with back problems and sciatica, so used cycling to help keep my fitness going. An 81 mile sportive in the New Forest kept me busy in April, followed by a 400 mile cycle challenge in September. But it was running that I truly loved and missed. With the go ahead from my osteopath I gradually eased back into it with lots of smaller runs and eventually re-joined Wednesday night club run which I had missed so much!

From that point on my running hit a new high. I took part in the KFL Cross Country events and finished third lady in our team for the season with a lovely trophy at our annual Harriers Awards Evening. 2019 was without doubt an epic PB year, with my aim to run one race every month (which I achieved). I ran my first half marathon with the Harriers at Deal, taking my previous HM PB from 1:46:47 to 1:42:45 on this exceptionally hilly course in horrific weather, coming 13th female and winning the ladies team prize with Charlotte and Sharon. Then improved my time further with a 1:38:33 at Paddock Wood. My biggest achievement of 2019 though has to be completing the North Downs 30k. The Harriers told me it would be tough, I’d done a bit of practice for it, but had only managed to complete 13.8 miles in my training! Race day came. It was scorching hot, but I can honestly say I loved every minute of it; until I reached the final two miles and was stuck behind some guy blaring out really bad techno music when my legs were already dead. But I struggled past him to save my ears and completed it under 3 hours; dying on the finish line!

To complete 2019 I won a team trophy as the fastest team with Jamie, Rob and Ari in the Marden Half Marathon in November, followed by a ‘third female’ prize at the Harriers’ Turkey Run in December (my favourite award so far)! Having entered 8/10 of the Kent Grand Prix races in 2019, I finished the season as 9th female overall, with the Maidstone Harriers female team taking third place; something I am so immensely proud of. My 2019/20 KFL Cross Country season was my best yet, and managing to come in the top 20 female runners for two of the final races out of a field of 300+ was for me, a huge success.

I can honestly say that joining the Harriers was the best decision I have ever made. Not only have I made wonderful friends, but I feel that I am part of a family. With injuries/ without, we are all here to support one another, and being Ladies’ Captain is a real privilege.