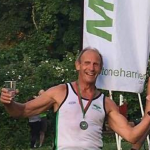 As a club founder member and life president since 1999, taking over from Herb Krause, I got into being sports minded from a young age in my childhood. I’m one of eleven children, being number 10. Life was always fun with so many brothers and sisters – we would set up our own running races, cycle everywhere and play all day outside and stick up for each other. This also made us very competitive, wanting to do better than each other.

When I left school and went to work, I was playing a lot of footballer the time – weekends and midweek five a side. I was riding motorbikes at the time and had a serious accident when I was sixteen where I spent 7 months in Pembery Hospital recovering. It took a bit of time to get things as good as new again, and my ankle has never felt right again so football was a no no for a time.

I decided to join Elliott’s, now Maidstone and Medway, under the close eye of Len Murphy where we toured the county’s doing track and field events. Graham Clarkson was a member as well. In 1982, when the second London marathon was on, I was training with my wife, sister and lots of family members for a sponsored run/walk Marathon from Herne Bay to Rainham station along the A2 on the 5th June 1982. I was the only one who decided to run out of our group, and I came 1st in 3hrs 08min. It wasn’t a big field in those days as marathons really had only just started getting popular.

I was also a member at Westborough Sports Club since 1975, the same time as Dave Thornby, where we did circuits/yoga on Monday evening. I saw an advert for Jogging and Beyond 16 week course leading up to the first Maidstone Marathon run by Elliott’s running club and I decided I’d like to join up. We did the Brooks Half Marathon half way through the course – I managed 1hr 25min . We also attended a seminar at The Hazlett Theatre, which was promoted by Mike Gratton – a local Kent runner from Canterbury Harriers, who that year won the London Marathon in 2hr 08 min.

We then went on to complete the first Maidstone marathon in 1983, my time was 2hrs 53 min – my first of many sub 3hrs marathons. We carried on running on a Monday night from Westborough Sports Centre doing the local races and now starting to call ourselves Maidstone Harriers. Three of us kept it going in the winter and we would get more during the summer months. In 1985 we affiliated the club from my house in Boughton Monchelsea where we did most of our Sunday runs around the Green Sands Way. We had two 8.5 mile courses which were run at 8.am and 9.30am – this was because my wife Vivienne ran and we took it in turns to baby sit the kids.

We often had over 30 people each Sunday – David Hattesley would come and join us. The first officers to run the club were myself, Janice Ockley, Anne Whitman and Nick Green – the rest is history!

I went on to complete 106 marathons and hundreds of other events over a 38 year period . I’ve been involved in putting on club races since we took over from Maidstone Lions in 1988, and I sponsored the Maidstone Half Marathon in 2000 and 2001 where it was renamed the Woodman Half. I am now the present race director of the Turkey Run which I have been heading now for 16 years. I’m now suffering from knees that won’t behave and found my love for cycling. I done several sportive cycle events and was lucky enough to get a place in the Prudential Ride London in 2019 where I averaged 17 mph! Not bad for a pensioner.  I’ve been organising club social rides on a Sunday which I love and hope to get the support to carry this on and help people gain confidence. The whole Harrier family have been a huge part of my life, making lots of friends on the way. Sadly you got to put up with me for a few more years yet!!!  I could write a book about my remarkable time as a Harrier – you got a little snippet today.

See you all soon!