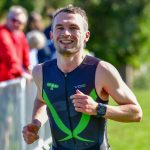 Before I went to university I was a competitive swimmer, however this somewhat dropped off during the four years I spent studying. Once I had finished uni, I wanted to get back into racing and decided that I would like to give a triathlon a go because I also enjoyed running when I was younger.

In 2015, I started to take part in weekly Parkruns and then entered my first triathlon at the end of the season. When I moved closer to Maidstone, I joined Maidstone Harriers because I wanted to be able to socialise with others and learn from like-minded individuals.

To keep the training varied, I go through phases of swimming with the club, participating in track sessions or plodding round on a Wednesday night for the longer club routes – all whilst chatting of course!

Throughout the season, I try to race as much as possible. I typically focus on either Sprint distance or Olympic distance triathlons and also enjoy a bit of cross country thrown into the mix over the winter months.