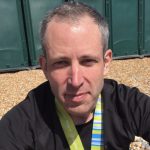 I have never been particularly sporty and my running journey started about 11 years ago.  While having a few drinks with friends over Christmas the idea of doing a 10k in London at the end of May was suggested.  We didn’t think much more about it until March when we decided some training would be wise and so joined the Sweatshop running group

I did a couple of races in the following years but it was about 5 or 6 years ago I started to pick up the frequency and distance of my runs.  I would run with a friend and on my own and we entered a few more races together.  Last summer I finally took this friend’s advice to join the Harriers.  This really helped my progress and I am now a much stronger and faster runner having spent the year attending track sessions and running with other experienced runners too.  The Harriers gave me the chance to meet lots of different types of runners and make new friends.  I have done more races in the last year than in the previous 10!

I have learnt a lot from others and wanted to get more involved in coaching so when the offer of attending a Leadership in Running course came up at the end of last year, I got involved.  I joined the coaching team and now coach track sessions on a Tuesday evening.  In November, the role of Head Coach became vacant and keen to continue my involvement in helping people develop, I took on that role.

I have also become one of the two club Welfare Officers and attended the Mental Health First Aid course through the club.  In my role as Welfare Officer, I will be helping to nurture the right supportive environment for all members and to be someone that people can turn to with any welfare or support issues.